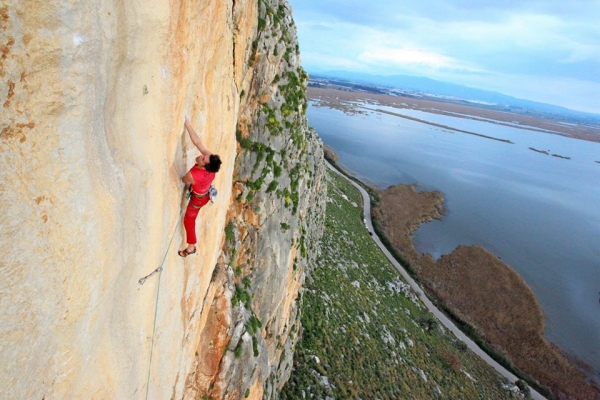 Aristomenis Thanopoulos, one of the best Greek climbers, has confirmed he will be participating at this year's festival. He'll be making a presentation titled "Deep Water Soloing explorations across the Greek coastline".

In 1996 and 1997 he accomplishes the 1st repeats of the hardest routes in Greece at the time, ‘Koralli’ (8a/8a+) and “Seirina” 8b, while in 2003 and 2004 he pushes further the limits of free climbing in the country to 8b+ (“Theia Diki”) and 8c (“Pteranodous”) respectively. Notoriously passionate about on-sight climbing, he is the 1st Greek to have on-sighted every grade from 7b or 7b+ till 8a, mostly during trips to the most important European crags, such as Arco, Tarn, Ceuse, Rodellar, etc. He won numerous national competitions and participated 6 times in the World Cup. He has put up about 200 new routes in Greece, mainly around Patras, mostly bolted, some natural, and a few hard multipitch routes in the Greek mountains. He has also climbed extensively in the Dolomites, where some of his most important ascents include the one-day red point of “AKUT” (8a, 500m) and the on-sighting of “via Calispera” (7c+/8a, 200m) and “Sognando Aurora” (7b+, 600m). During the last decade he has explored a significant part of the Greek coastline for the purpose of Deep Water Soloing, where he has climbed numerous new lines and some very long traverses up to 800m with difficulties up to 8a. The description of these explorations will be the main objective of his presentation during the Kalymnos International Festival 2019.

Aristomenis Thanopoulos holds a PhD in Electrical & Computer Engineering and is usually occupied, when not climbing, as an adjunct Professor in Technological Educational Institutes and in Institutes of Vocational Training.