Presence in popular sites, blogs and social media, such as:

Below you can see the participation of Greek and International Media (specialized and general) at the previous climbing festivals. 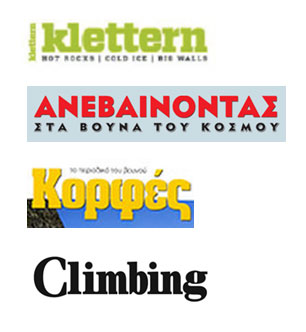 Situated between Kos and Leros, Kalymnos is the fourth largest island in the Dodecanese.

Here you can find some basic information about the Kalymnos Climbing Festival.

The Island of Kalymnos during the last 15 years has established itself as one of the world’s top sport - climbing holiday destinations.

The Kalymnian landscape is rocky, with rock faces of unique quality for sport climbing, easy accessible within a few minutes walking time from most of the islands settlements and motorways, offering breathtaking views with the endless blue of the Aegean Sea.

Today the island has almost 2500 well equipped sport climbing routes for all climbing levels from easy routes for beginners to extremely hard ones for the experts. The island features a series of easy slabs, technical wall climbs, wild overhanging and climbs between stalactites. The majority of the routes are single pitch but several multipitch routes are available as well. Climbing instructors on the island offer climbing lessons and guiding.

Not to miss the annual Kalymnos Climbing Festival.The specific event has already taken place the years mentioned below:

It is worth mentioning that some of the previous festivals were sponsored/coorganized by companies such as The North Face and Petzl.

Also, it is important that in Kalymnos there is a Rescue Team which can aid in any accident concerning climbing or other activities that take place on land and in rough areas that medical care cannot reach easily, as in trekking paths around the island.

Published in About
Tagged under
Be the first to comment!
Read more...
Page 6 of 6
BIGtheme.net Joomla 3.3 Templates
"The search for climbing paradise ends at the greek isle of Kalymnos"
Rock and Ice (Feb 2001)